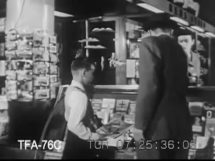 Twelve year old Bobby takes the train to visit his uncle way the hell in another town over 8 hours away by train. This takes place in 1954 before pedophiles were invented. In this video, he gets on the train and sleeps overnight in a small bunk. He gets to walk all over the train from the scenic car to the dining car too. If this was today, Bobby would probably be a snowflake and not be allowed on his own on the train until he was about 24. Even then he would get offended and complain about something. Today, 12 year old Bobby would never risk taking the train on his own but if he did, and wandered all over the train some pedophile would find him for sure. By the time he got off the train his asshole would be the size of a grapefruit. Watch this neat video and see how in those days a 12 year old boy could ride the train on his own without getting corn-holed.

Do NOT follow this link or you will be banned from the site!